13 of the Most Creative Promotional Products of All Time

Handing out promotional products is pretty simple. Contact your friendly neighborhood distributor (QLP is a great choice), order your pens, and give them out to people at tradeshows, conventions, and even on the sidewalk. Pretty simple, right?

Some companies, however, have taken it a step further and put some serious thought into promoting their brands with some innovative products. They developed full-blown campaigns, and after you see some of these creative promotional products you’ll be like, “What!? Why didn’t I think of that?”

OK, you might not think that for all of these examples, but each of these companies created a memorable product and connected their brand with an issue, hobby, or problem straight from people’s daily lives. So let’s get right to it! Here’s the list of the most creative promotional products of all time.

A few companies geared their promotional products toward people’s stomachs. The first one might be one of my favorites. The Y+ Yoga Center in Shanghai, China, imprinted a person on the bendy part of a straw to make them look like they were striking a yoga pose every time the straw was bent. Personally, the only time I’d be able to bend this way is if my likeness was imprinted on one of these straws. It makes for a fun promo product, because who doesn’t love a bendy straw? The straws were given out to customers at local fruit juice bars. 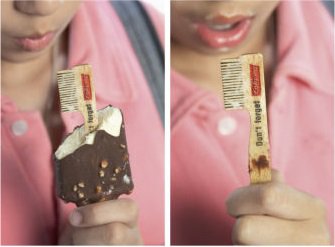 As fun as bendy straws are, our next example might appeal to people even more. That’s because it involves ice cream, and if you don’t love ice cream, you’ve never had a S’mores Blizzard from Dairy Queen. Try it. You’ll thank me later.

But this promotional product isn’t from an ice cream company. It was a toothpaste company’s campaign. Colgate Palmolive in Thailand gave out ice cream and cotton candy during Oral Health Month and other events throughout the year.The sticks on these sweet treats were shaped like toothbrushes with the message “Don’t Forget” along with their company logo. It was a simple, but very effective way to offer a healthy reminder and at the same time create a connection between the sweet treat and the Colgate brand! 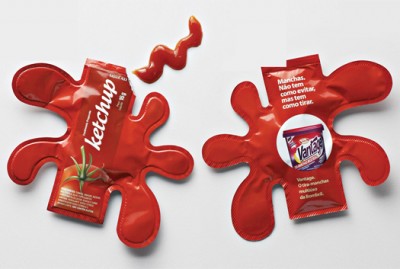 Our next example is more food adjacent instead of food-themed. Vantage Detergent, a company in Brazil, handed out packets of its stain remover in the shape of a ketchup stain. The packet read, “Stains. Hard to avoid, easy to remove. Vantage stain remover.” These packets were a great way to grab customers’ attention in a quick and easy way.

About 100,000 of these custom packets were distributed to restaurants and snack bars around the city of São Paulo. They were gone in three days. The company found out later that a lot of customers ended up taking home the packets as souvenirs. 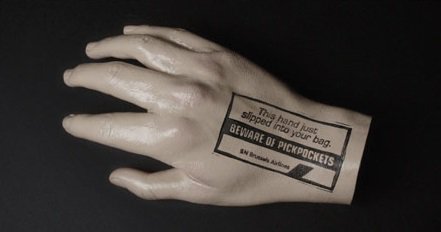 Some promotional products border on the line between “Oh, that was really creative” and “Wait, they did what?” This next example fits right on that line. Brussels Airlines was looking for a way to raise awareness about pickpocketing. So, they slipped rubber hands into passenger’s unattended bags at the airport with the message, “This hand just slipped into your back. Beware of Pickpockets.” The airline’s logo was imprinted just below the message.

Now, I know what you’re thinking. And no, I’m not going to encourage you to go putting weird objects into people’s bags at a convention or tradeshow. (In fact, I’d strongly urge you not to do that. Ever.) But again, just because it’s weird doesn’t mean it wasn’t effective. Sure, people might have freaked out that a rubber hand was now in their bag, but you can bet most of those people watched their bag with an eagle eye after that.

5. Friends of Cancer Patients and Towels 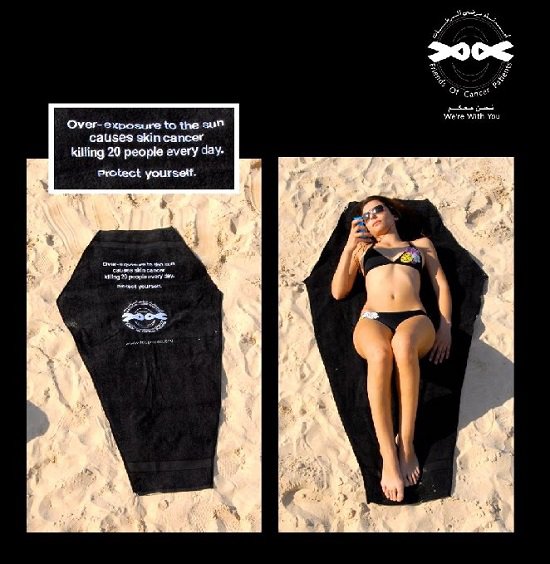 Pickpocketing is just one example of using promotional products to raise awareness for some cause or foundation. Friends of Cancer Patients wanted to raise awareness about skin cancer so the company handed out beach towels to sunbathers in Dubai.

However, these towels were black and cut in the shape of coffins. Yep, coffins. The towels were imprinted with the saying, “Over-exposure to the sun causes skin cancer killing 20 people every day. Protect yourself.” A bit of a shock value promotional product, but still effective nonetheless. 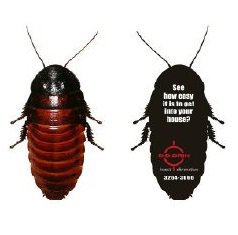 The next product to make the list is not for the faint of heart. I wouldn’t say I have a phobia of bugs, but there was one time when a spider decided to join me in the shower, and let’s just say I sounded like I was a 12-year-old girl at a One Direction concert.

So when I came upon this next product, I was glad to know it was from a few years ago and I wouldn’t run into it. D.D. Drin Insect Elimination took fake cockroaches and slipped them under people’s doors at their homes. “See how easy it is to get into your house?” was imprinted on the cockroaches’ belly along with contact information for D.D. Drin. If it was me, I probably would’ve tried to crush the thing before I even thought, “Hey, maybe this is a promotional product.” I’m hoping the cockroaches were made of durable material.

7. Save Memories with Alzheimers New Zealand

Playing off the services your company offers is a great way to come up with a creative promotional product idea. Alzheimers New Zealand handed out working erasers that had been hollowed out and fitted with a USB drive. On one side the company imprinted the message, “Alzheimer’s Erasers Your Memories. Save Them.” The reverse had the company’s logo directing people to their website for more information.

The company gave out the USB drives to local organizations and local politicians seeking to raise awareness for the company. The campaign was so popular that it won the Silver Design Lion at Cannes International Advertising Festival in 2010.

8. Novocortex Scratches Cars, but Not Really

Sometimes you need to make sure whomever you give your promotional products to has a sense of humor. Novocortex, a digital marketing business, helped a newly formed Dutch car insurance company recruit customers by making it seem like their cars had been scratched.

Of course, no damage was actually done, and instead the “scratches” were printed on static paper that stuck to the vehicles. “We repair your damages as easily as you remove this sticker,” was imprinted on the sticker along with the car insurance company’s name and contact information. Novocortex actually filmed people’s reaction to the campaign and put it on YouTube. Check it out below.

Again, if you’re going to go this route, make sure your target market can laugh off the fact that you pretended to damage their car and won’t scratch up your own car in retaliation. 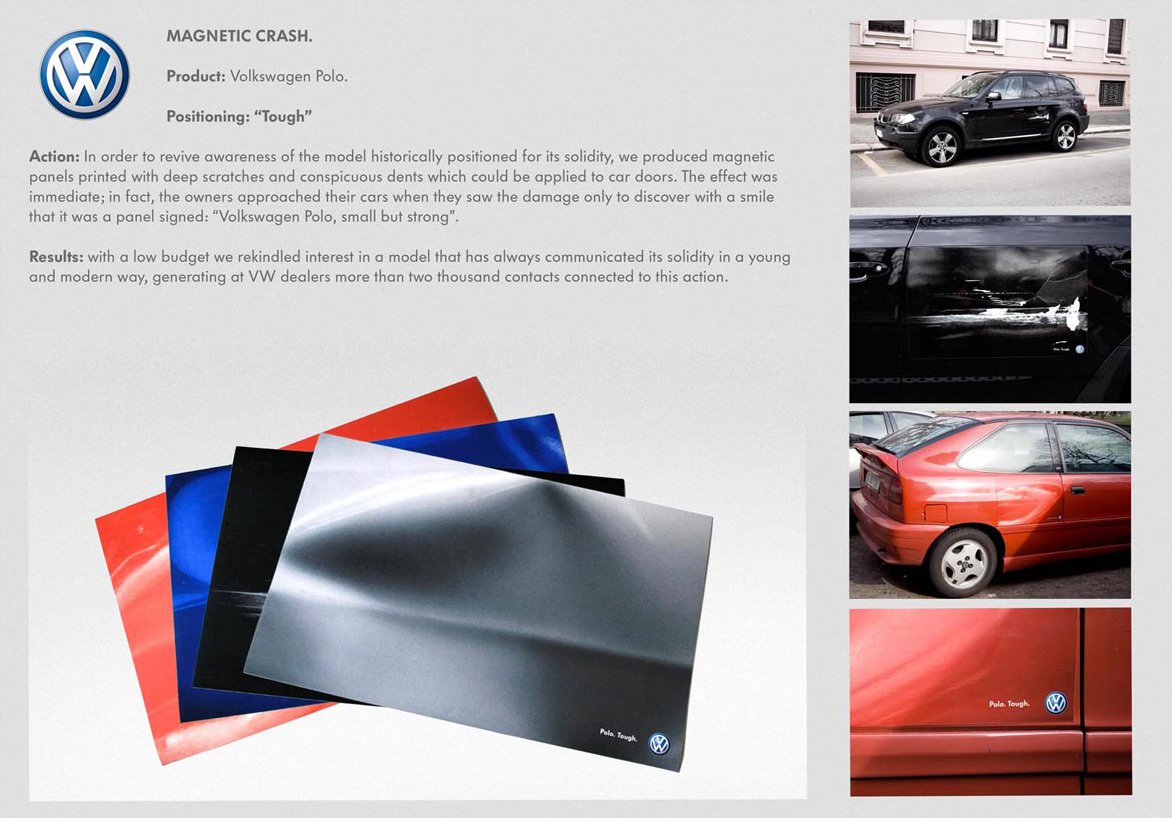 In a similar scenario, Volkswagen was looking to promote its Polo model as a tough vehicle even though it’s small. So it had magnetic panels made that were printed with scratches and dents. The magnets were put on the cars of unsuspecting individuals along with the message, “Volkswagen Polo, small but strong.” The company reported more than 2,000 contacts as a result of the magnetic panels. 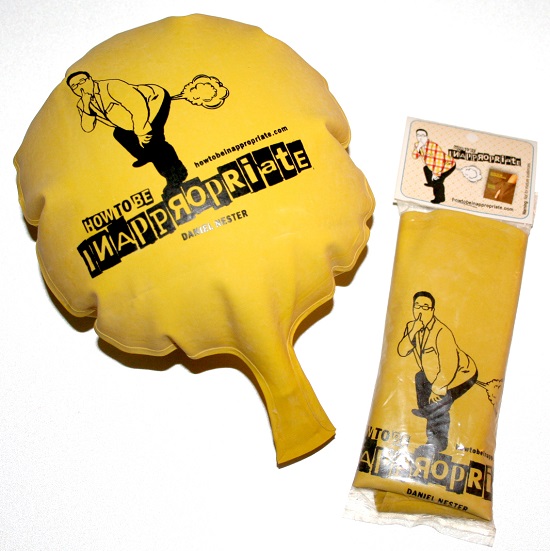 Speaking of pranks, if there was a symbol for tomfoolery I would vote for the whoopee cushion. This next example involves that quintessential prank product that most of us have probably used on someone (or had it used on us.)

Daniel Nester, author of the book “How to Be Inappropriate,” handed out whoopee cushions to anyone who bought his book. The whoopee cushions were customized with a drawing done by Nester along with the title of his book. So next time you hear a flatulent-like noise, be sure to look around for someone reading Nester’s book and laughing to themselves. 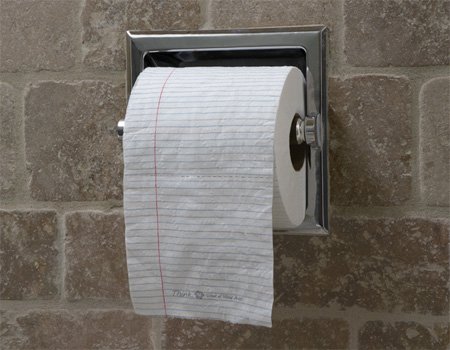 Have you ever been in the bathroom and desperately needed a piece of paper to write down something really quickly? No? Yeah, me either. Well, the School of Visual Arts in New York looked to lend a hand in that area if, you know, a friend was in that type of predicament.

In fact, the school took several different everyday items (toilet paper, napkins, sugar packets, and tray liners) and made them look like notebook paper. At the bottom of each product was a simple imprinted message: Think, followed by the school’s name. Once again, you’re left with a memorable product that connects items we use every day with the company.

12. Dogs are Stronger with Iams

Don’t worry, pets weren’t left off this list! Catering to our furry family members is a great way to inspire some creativity. Iams, the pet food company, handed out promotional Frisbees in the shape of barbell weights. Each disc had “Strong Dogs” imprinted along with the Iams name letting customers know that their dog would be stronger if it eats Iams Dog Food. Plus, Iams knows most dogs love Frisbees. This promotional product has “winning” written all over it.

This last example wasn’t a mainstream promotional product given out to a widespread audience, but it was still a great example of promoting a brand. A lot of television networks will send out press kits for upcoming shows with promotional items inside, and the showrunners at the TV show Fringe did it right.

In the press kit for an episode that aired in 2009 they sent Tabasco sauce with the label “Observers Are Here.” In the show, Observers are people who have to eat spicy foods in order to stay alive. It was a really fun way to stay within the theme of the upcoming episode.

So there you have it. A baker’s dozen of examples involving some really creative ways to brand products we’ve all probably used regularly in our everyday lives. As I was looking through all of these examples there was one theme that really stuck out at me. They are all memorable. Even years after some of these products were given out, they are still being talked about today.

Also, all of these companies established a message that uses the products to cater to their brand. Sure, a construction company can get Steam Roller Stress Relievers. That’s easy, and while it’s effective at drawing attention to your company, it doesn’t have the same sustainability as say fake bugs slipped under doors.

All of these companies didn’t take an easy approach. They took ordinary products and made them extraordinary by coming up with a creative message. So if you haven’t already, take a look at our website, and let the creative juices start flowing!

The North Face is coming to Qu...

Other posts by admin